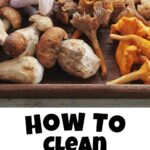 I absolutely love mushrooms. They provide a deliciously rich and meaty flavor that compliments a variety of dishes.

Mushrooms can even be the main star for a meatless Monday or vegetarian dish without feeling like you're sacrificing heartiness.

However, I stopped using fresh mushrooms as often as I would have liked for quite a while because cleaning mushrooms is such a pain.

But, I have recently started using them a lot more often again after learning mushrooms really can be washed quickly and easily.

Why You Should Clean Mushrooms

Some will say you don't even need to wash mushrooms, especially if they already look dry and mostly clean. Though I don't think I've ever purchased a package of mushrooms from the grocery store that didn't have visible dirt.

Whether it's organic or not, I feel you should always wash any produce you get, even if it's from your own back yard.

You have no idea what has touched it or how it's been handled since it was picked and ended up in your kitchen. Think bugs, poop, and dirty hands.

This is especially important when you're eating raw mushrooms. A bit less so if you're cooking them and will most likely kill any harmful bacteria.

Most commercially sold mushrooms are grown in pasteurized peat moss these days and not out in the wild.

So, it's certainly not the end of the world if you do consume some as it's not straight-up dirt that's been exposed to the elements.

However, having as little debris as possible makes for a better looking and tasting dish.

Unfortunately, it seems that just about every chef or cook has a different idea for the best methods to clean individual mushrooms.

When I started cooking several years ago, I was taught to clean mushrooms by either brushing the dirt off with a soft mushroom brush or using a damp cloth or damp paper towel.

That you aren't supposed to wash them like normal produce because they'd retain excess water.

It was theorized that because mushrooms have about a 90% moisture content, adding any additional water would make them become waterlogged and no longer tasty because they would tend to be soggy and flavorless.

Using this method would take several minutes that I just wasn't willing to spare every time I wanted to used them, even for just 10 ounces of mushrooms.

Since then, I have learned that you can indeed wash mushrooms in much less time without them absorbing too much water and ruining them.

Yes, You Can Wash Mushrooms

Yes, it really is okay to wash mushrooms. Sources I trust like Cook's Illustrated and Alton Brown (watch the video) confirm as much.

They actually did testing by weighing the mushrooms before and after washing and the mushrooms only absorbed a tiny amount of water.

Plus, you can cook off any excess liquid the mushrooms release as they cook by using medium-high heat and by not over-crowding the pan.

Every source I've read that recommends washing mushrooms with water has the same takeaway: just don't leave the mushrooms sitting in the water.

If the mushrooms are just slightly dirty, I find this is the easiest way to clean them.

Put them in a colander and and give them a quick rinse with cool water with the kitchen faucet sprayer.

I especially like to use this method for pre-sliced mushrooms. Since they're already sliced, they have a greater surface area to absorb more water.

Plus, they're generally cleaner than whole mushrooms anyway.

If there is a lot of debris on the mushrooms, I fill a large bowl about half to three-quarters way with cold water. Then, add the mushrooms, and use your hand or a spoon to agitate and stir them around for 1 minute or until most of the dirt has settled to the bottom of the bowl of water.

Dry the mushrooms: Either method you use to wash the mushrooms, it is recommended to give them a quick dry afterwards to get rid of extra moisture by pouring onto a clean towel or paper towel and patting dry, or even by using a salad spinner.

Then you're ready to eat or cook with them as desired.

One exception, as there always is, is morel mushrooms.

Since they are so dirty, it is recommended to first get as much dirt off of them as possible whether with a brush, towel, or simply throwing into a brown paper bag and giving a good shake - but not so hard that you bruise them.

If you do shake them, make sure you lift them out of the container and not pour them out, because then you'll just pour the debris right back on top.

Then you want to put them in a large bowl of cold water and swirl them around as mentioned above.

They can be so dirty that you may have to do this step more than once.

Then lay them on towels and pat dry, moving them around a bit to make sure all of the water drains out of the holes.

After that you're ready to get cooking.

How should washed mushrooms be stored? Actually, you should only wash mushrooms just before eating or cooking them.

Otherwise, they will start to go bad and you'll have slimy mushrooms very quickly.

Before cooking mushrooms, I keep them in their original packaging. Most are packaged in a specific way to help prolong their shelf life.

If you do opt to put them in a plastic bag, make sure to poke some holes in the bag for air flow. There are differing opinions on if paper bags are a good option since they are a bit porous and can also help absorb excess moisture.

As long as you bought fresh mushrooms that didn't look discolored, bruised, dried out with woody stems, or wet, most will last at least 4 days if not a week before needing to be used.

Keep in mind that if you buy pre-sliced mushrooms they usually won't last quite as long.

Depending on the type of mushroom you're using, you may also want to trim them or remove some of the gills, like with large portobello mushrooms.

I recommend doing this after cleaning so you're not cutting any bacteria and such into the flesh of the mushroom.

It's generally recommended to cook mushrooms before freezing them for the best quality.

Now that you know how easy it can be to wash mushrooms, here are some of my favorite recipes using them.