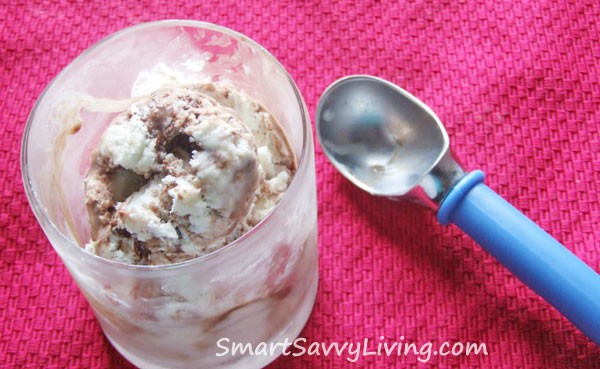 Homemade Vanilla Fudge Swirl Ice Cream for those of us that can’t decide between chocolate or vanilla? Yes, please!

If you didn’t read the original post, it was quickly declared Mr. Savvy’s favorite ice cream ever, store-bought or homemade.

While he has a boring ice cream personality and is quite content to eat plain vanilla ice cream all the time, I like various ice cream flavors now and then.

Back in December, it was Mr. Savvy’s birthday and he requested a marble cake with ice cream.

So, I pondered an ice cream that would go well with marble cake and immediately thought of a vanilla fudge swirl ice cream. The perfect match in the cake and ice cream realm, right?

Since I already knew I wanted to use the delicious vanilla ice cream from last time as the base, I just needed to come up with a delish hot fudge sauce and decide how to incorporate it.

While you could totally use pre-made hot fudge sauce in this homemade vanilla fudge swirl ice cream recipe, I wanted to make mine from scratch to be special for a birthday.

I’ve already posted the hot fudge sauce recipe – just follow the link to get it. It’s so good I may or may not have eaten several spoonfuls of it while waiting for the ice cream to freeze up.

The resulting ice cream is just as good as the original. The homemade vanilla ice cream is creamy and smooth and the hot fudge has a chocolate flavor that is just rich enough without being too sweet that accents the vanilla perfectly.

The vanilla fudge swirl ice cream is great on its own, to make a sundae with, on brownies, and of course, cake. It’s also great for Valentine’s Day desserts since it’s full of yummy chocolate flavor.

Place cream and vanilla into large bowl or bowl of stand mixer and whisk or mix until stiff peaks form. Using a cold bowl/whisk/cream will help your cream whip faster.
Once you have whipped cream, pour the sweetened condensed milk over the top and gently fold it into whipped cream.
Pour mixture into a 2-quart freezer-safe container and cover. For this flavor I like to use a wide container versus a deep container to make swirling in the hot fudge easier later on.
Freeze for at least 2-3 hours. The goal is to have partially frozen ice cream so that you can swirl in the fudge without making chocolate ice cream, yet not have the ice cream be so hard that it is impossible to swirl in.
Once partially frozen, remove from freezer and pour thick long ribbons of fudge over the ice cream, about 1/2 inch apart.
Using a knife or chopstick, swirl the hot fudge into the ice cream in figure 8 motions. You don't want to stir it in or you won't really have swirls. Make sure to take the knife or chopstick all the way to the bottom of the container. See pictures below for reference.
Replace cover and freeze for an additional 3+ hours or until fully frozen.
Once frozen, scoop and enjoy. Note that this ice cream should not get rock hard unless your freezer is very cold, and thus shouldn't need to sit at room temperature long, if at all, to scoop. Leftovers may be kept in the covered container and frozen.

Previous
5 Tips for Keeping Your Healthy Eating Resolutions and Goals 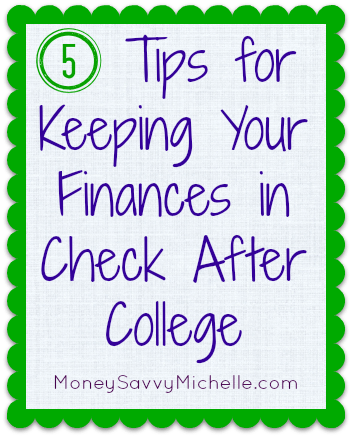 Next
5 Tips for Keeping Your Finances in Check After College
Click here to cancel reply.

This sounds amazing. I never knew you could make ice cream without a ice cream maker. I so want to try this. You could make a sstrawberry swirl too. Or add peaches. Thank you so much for tgd recipe.

This looks awesome, Michelle!! I constantly crave ice cream and this looks so incredibly easy.

Thanks, Jen! It still amazes me just how good and creamy this ice cream is for being so simple.

This is awesome! I've never made homemade ice cream before because it always seemed too difficult with the recipes that require ice cream salt and ice cream makers and such. I'll have to give this one a try!

That's why I love this recipe so much, Jenni! It takes minutes to put together and no mess or keeping a tub in the freezer. :)