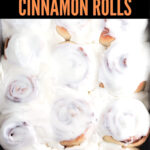 This Homemade Cinnamon Rolls with Cream Cheese Frosting Recipe is the perfect way to start the weekend! Flaky layers of slightly sweetened yeast dough are filled with a buttery cinnamon filling and topped with the perfect cream cheese frosting for cinnamon rolls.

As I’ve mentioned in the past, I find it tough to eat breakfast during the week. However, on weekends and holidays, I really enjoy going to the trouble to making a nice homemade breakfast or brunch.

One of our favorite indulgent breakfast and brunch foods just so happens to be this homemade cinnamon rolls with cream cheese icing recipe.

Sure, you could hit up the local Cinnabon. But I find there is just something extra special about going to the trouble of making homemade cinnamon rolls.

These homemade cinnamon buns are perfect to bake while opening presents on Christmas morning. They're also a favorite for Easter brunch or even just because.

I know a lot of people are a bit scared to work with yeast. We've all heard horror stories of going to all the trouble and ending up with inedible hockey pucks. I've certainly been there.

Just take your time and go through the steps carefully until you get the hang of it. it’s really not something to totally stress yourself out over.

Using a stand mixer or bread machine can take out a lot of the guesswork, but kneading can be just as easy with some practice. I've even shared several tips for using yeast to help make sure your rolls are a success.

These rolls are made up of traditional cinnamon roll flavors that let the cinnamon flavor really shine through without being too potent. Of course, if you’re like me, the frosting is actually your favorite part.

As always, you can change up the recipe to your liking. For example, I added raisins to the filling. I'd add them to the dough itself next time, though, so they don't fall out of the roll so easily.

You could also add nuts or instead of using cinnamon, opt for lemon or orange zest, which would also make a great addition to the icing.

Homemade cinnamon rolls are a bit time consuming due to rise time if you're like me and don't like getting up super early.

So, my super smart savvy tip is to make the dough, let it rise, then make the cinnamon rolls, place them in the pan, cover with plastic wrap and leave in the fridge overnight. You could also freeze them at this point.

I then take them out of the fridge and leave on the counter to warm up and rise a bit more while I get ready and the oven preheats. Then, make the cream cheese frosting while the rolls bake or you can make it the night before as well.

Those look amazing!I pinned this recipe.Thanks for sharing :)

In your Homemade Yeast rolls recipe, you mention in the ingredient part "if your making cinnamon rolls" can I use that recipe for this? I made the rolls and they are WONDERFUL! This time when I made them I put half the dough in the fridge and planned on making the cinnamon rolls, but this recipe is different???? Just wondering, thanks so much!

I'm so glad you enjoyed the rolls recipe! Yes, you can use that dough in this recipe. I've doubled it a number of times just to make cinnamon rolls as well. The ingredients in this recipe are very similar, this one just uses a bit more butter and sugar for a slightly richer dough to stand up to the filling and icing. We love them both ways, though!

I am trying this recipe now as I'm writing this comment. My dough is now rising in my garage beacuse it's extreamly humid/warm in there. I'll let you noe hoe the come out. Thank you for this easy recipe.

these look great ! my kids will want to eat them all

I'm a sucker for pastries! Pinning for later! :)

They're so good, Dawn. I can only make them rarely or I'll totally pig out!