I had an 82-pound large ovarian cyst that resulted in surgery to remove it along with a total hysterectomy. Here’s what life was like when I found out if I had cancer or not.

If you’d like to start at the beginning with my experience of having an 82-pound large ovarian cyst you may want to go to my first post in this series where I talk about my symptoms that made me go to the ER in the first place.

Being self-employed this really hindered the amount of work I could do while waiting for surgery and a lengthy recovery afterward which I’m still working on, plus an uninsured $4,000+ ER bill from my first visit and insurance is trying to fight paying a $3,200 ER bill from a complication the nurses line told me to go to the ER for.

Plus I will have more time I will be very limited in work time late summer 2019 as I have to have another surgery so I am sharing my GoFundMe page a friend set up for me or my direct PayPal link and appreciate any and all donations and shares.

Please note that some photos may be uncomfortable for some to view. I don’t show any boobs or privates but most posts include photos of incisions, bruising, etc.

This is a rather long series so I've put together this table of contents to make the articles a bit easier to navigate.

In my previous post in my 82-pound large ovarian cyst experience series, I talked about how even after surgery I was constantly vomiting and had to have an NG tube put in.

At this point, I still had the NG tube in with its own fun and challenges. But, I finally got official confirmation of if I had cancer or not.

Contents hide
1 Are Ovarian Cysts Cancerous?
2 What Does It Feel Like To Know You May Have Cancer But You Don't Yet Know For Sure?
3 So, Do I Have Cancer?

I think anytime you are told you have some sort of large unidentifiable mass, or any size mass, really, your first thought is holy fork, do I have cancer? That was certainly my first thought, anyway.

As soon as I got home from the hospital after my first ER visit, and on my phone while still in the hospital during that first visit, I was searching for experiences on large ovarian masses and cysts.

If you don't recall, when I was told I had the mass I wasn't told anything other than that it was very large and that the surgeon would be down to talk to me when he could. So, I was freaking out about the aspect of cancer.

When I did see the surgeon's team they did tell me that it didn't appear to be cancerous from the scans but you can never really be sure until you get in there and have pathology done. So at that point, I was feeling a bit better but that stress is there as you obviously don't know for sure.

I mean, after all, they did tell me that it was so large they thought it was coming from my ovary but they couldn't even be sure of that.

I probably looked at nearly 100 sites for info, but from ones I trust, like Mayo Clinic, I learned that ovarian cysts are very common and unfortunately have a lot of the same symptoms whether they are cancerous or not.

However, there's only a small chance of them being cancerous. And your blood test for cancer can be high even if it's not cancer because of multiple reasons but having ovarian cancer isn't as common for younger women.

This article suggests that "According to the OWH, between 5–10 percent of women with ovarian cysts will have surgery. Of that number, between 13–21 percent are cancerous."

What Does It Feel Like To Know You May Have Cancer But You Don't Yet Know For Sure?

Too long, didn't read: knowing there's a possibility that you have cancer and knowing you won't know for sure for weeks and there's nothing you can do about it in the meantime is scary as F.

I'm well versed in dealing with stress but dealing with the unknown and unresolved is always toughest for me.

When I was at the ED the first time and found out I had the mass the doctors said it didn't look cancerous from what they could see but it would have to be sent to pathology once removed to be sure.

Through my own research, I saw that with what my type of mass appeared to be they were rarely cancerous, less than 10% or so.

It was reassuring to know the odds were at least in my favor.

But, in my first 30 years of life, I have been through so many crazy random things that most people would probably think I'm lying about if I told them. I knew that I could still very well be one of those unlucky ones.

Honestly, though, I felt so terrible I didn't give it too much thought or tried not to anyway.

I had promised myself to take it one step at a time. And for that moment it was surviving a very high-risk surgery.

I won't lie. While I wasn't suicidal I felt so badly I knew I wouldn't want to live long feeling this way if I did have cancer.

I wondered if this is how cancer patients on chemotherapy and similar treatments must feel with so much pain even sitting up, not being able to keep any food down nor having the desire to eat, barely being able to walk short distances, etc.

When I was in the hospital two days before my surgery under observation because I was having so many issues just trying to survive and get around at home one of my nurses told me she had been doing this for years and it's not going to be cancerous.

The immediate pathology completed during surgery didn't show any cancer. However, my surgeon did find some suspicious areas on my cervix and uterus so he removed everything but my other ovary.

This was worrisome for me, of course. But I still felt horrible following the surgery, though thankfully not in much pain.

I didn't have the energy to fret about things, so while the voice of what if I do have cancer was in the back of my head, I promised myself to not borrow worry about things I don't need to worry about right now. 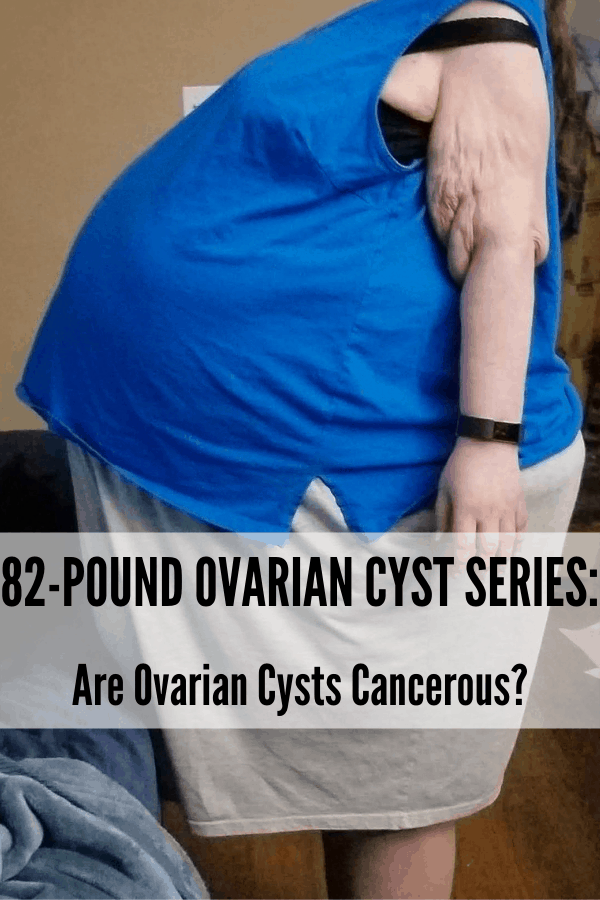 So, Do I Have Cancer?

Before I had surgery my surgeon went through the steps of how they do a basic pathology to see if things look cancerous. The cyst didn't look cancerous during the surgery, thankfully.

And then they also send samples out to be looked at further and it may take 1 - 2 weeks before the results are in.

Thankfully my results only took 5 days to come in. I was about to get my vitals taken when Mr. Savvy told me I had a letter in MyChart, an online portal for test results and doctor communication, with the results.

I asked him what it said and he told me I should look for myself. So, my first thought was oh God, what must it say if he won't just tell me.

Long story short, I didn't have cancer. I did have:

Here's the letter with the total pathology report in full including sizes and weights if you'd like to read it. The personal information I don't wish to share online is blacked out.

Note that while it does say something about hoping I was recovering well at home I was actually still in the hospital. I think this is something the doctor's office probably keeps as a basic template and they forgot to change it.

As soon as I skimmed through the letter I started crying and read through it again to make sure I hadn't missed anything.

Then I apologized to the nurse who probably thought I was nuts for randomly crying, saying that I just found out I didn't have cancer.

I had never cried happy tears in my life until then. I totally got why people sometimes cried at happy news as I'm a very empathetic person but it was something I had never personally done before.

To say it was something I was happy to not worry about anymore even though I wasn't allowing it to consume me is an understatement. It was also apparent it was worrying me more than I even realized not knowing for sure.

It certainly felt like a huge weight lifted off my shoulders. Like I knew I could now totally and fully concentrate on recovering from the surgery and hopefully not have any long-term side effects of carrying around such a large mass and having a hysterectomy.

Like I might actually feel like living an active fulfilling life again for the first time in a long time. But, my first milestone needed to be getting the NG tube out and getting well enough to be able to get released from the hospital.

My next post in the series will be about how I was finally able to get the NG tube out after what felt like an eternity at the time.