Skip to Content
Our articles may contain affiliate links and advertising that we make a commission from.
I had an 82-pound large ovarian cyst that resulted in surgery to remove it along with a total hysterectomy. Here’s what life was like when I went from thinking I'd no longer be vomiting and would be enjoying real food again to getting an NG tube put in instead.

If you’d like to start at the beginning with my experience of having an 82-pound large ovarian cyst you may want to go to my first post in this series where I talk about my symptoms that made me go to the ER in the first place.

Being self-employed this really hindered the amount of work I could do while waiting for surgery and a lengthy recovery afterward which I’m still working on, plus an uninsured $4,000+ ER bill from my first visit and insurance is trying to fight paying a $3,200 ER bill from a complication the nurses line told me to go to the ER for.

Plus I will have more time I will be very limited in work time late summer 2019 as I have to have another surgery so I am sharing my GoFundMe page a friend set up for me or my direct PayPal link and appreciate any and all donations and shares.

Please note that some photos may be uncomfortable for some to view. I don’t show any boobs or privates but most posts include photos of incisions, bruising, etc.

This is a rather long series so I've put together this table of contents to make the articles a bit easier to navigate.

In my previous post in my 82-pound large ovarian cyst experience series, I talked about the first few days of recovery after surgery. I warn you now that this post is full of talking about vomiting to the point you might feel the urge to make a drinking game out of it.

Contents hide
1 Still Vomiting Post-Surgery
2 It's Time For NG Tube Placement
3 Dear God, Is This Tube Ever Coming Out?

I was hoping, and so looking forward to, being able to enjoy real food again a few days after surgery. I hadn't really enjoyed eating or cooking for a couple of months now.

It was honestly rather depressing as someone that identifies as a major foodie and makes the majority of their income on creating and testing recipes.

However, life had other plans.

I was still on the clear liquid diet and also getting the anti-nausea and acid-reducer medications. Unfortunately, the vomiting still kept going, too.

And then the vomiting got even worse than it was before the surgery. I was vomiting what felt like pure stomach acid amplified times ten of anything I felt before surgery.

It was about as awesome as it sounds. I was hoping it was a one-time thing, but then it happened again, and then again.

So we let my nurse know what was going on. It burned so badly that it really scared me I was going to seriously damage my throat on top of all the vomiting I'd done the past couple of months.

It also immediately made me hoarse. I'm a very soft talker to begin with so trying to call for help through the intercom while sounding even quieter was a wonderful experience when Mr. Savvy couldn't be there.

They gave me more anti-nausea medications while waiting to hear back from my doctor. He came by a while later and suggested I get an NG tube also known as nasogastric tubes, as it would help me feel a lot better.

In the meantime, I'm still vomiting A LOT. So, yeah, sure, anything is better than this. Let's do this. 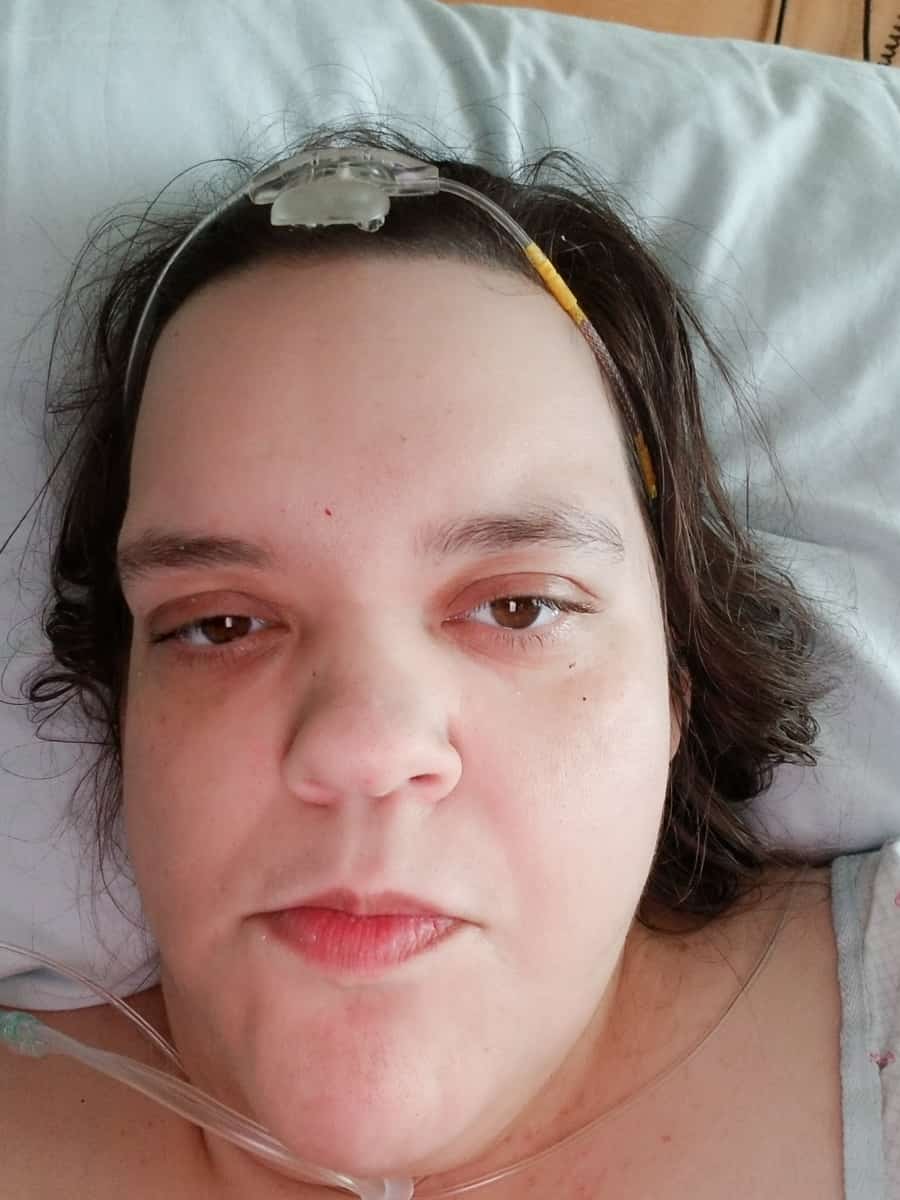 It's Time For NG Tube Placement

I was supposed to have a tube inserted into my stomach during surgery because the anesthesiologist was concerned about all of my reflux. I didn't feel any irritation from it when I woke up so I wasn't expecting anything other than a minor annoyance.

Even though I'm not in the medical field, science and medicine have always fascinated me so I read about it quite a bit because I'm a nerd like that. Everything I've ever read about or heard from others about NG tubes has shown them to be a bit annoying, sure, but no big deal.

I, apparently, wasn't so lucky. But I am still thankful I went ahead with it because as frustrating as it was, it was better than feeling like I was literally vomiting up lava multiple times an hour.

It was the first time my nurse had put one in and she had guidance from a nurse at a higher level. I had no problem with this and it wasn't anything she did wrong. Everyone has to learn sometime.

It was tough for me to get the tube down. It felt like it was a lot larger than I personally needed.

Then, when it was finally in and before they turned the suction on, I was vomiting up more lava. Now that was an interesting sensation and had everyone running to get things moving.

I felt icky and also bad for the nurses because I was having to change gowns so many times. Finally, the suction got turned on in one of those situations where 30 seconds feels more like 30 minutes and OMG the crap it was pulling out of my stomach.

The tube goes through your nose and down your throat so you get a lovely up close and personal sound and viewing of all of this. It was this super gross mix of green, yellow, and brown and you could visibly see chunks of stuff even though I hadn't had anything solid in days.

At least I couldn't smell anything because I can only imagine and I was thankful I'm not one to easily be grossed out in the first place. But having the tube in did take away all the vomiting thankfully. 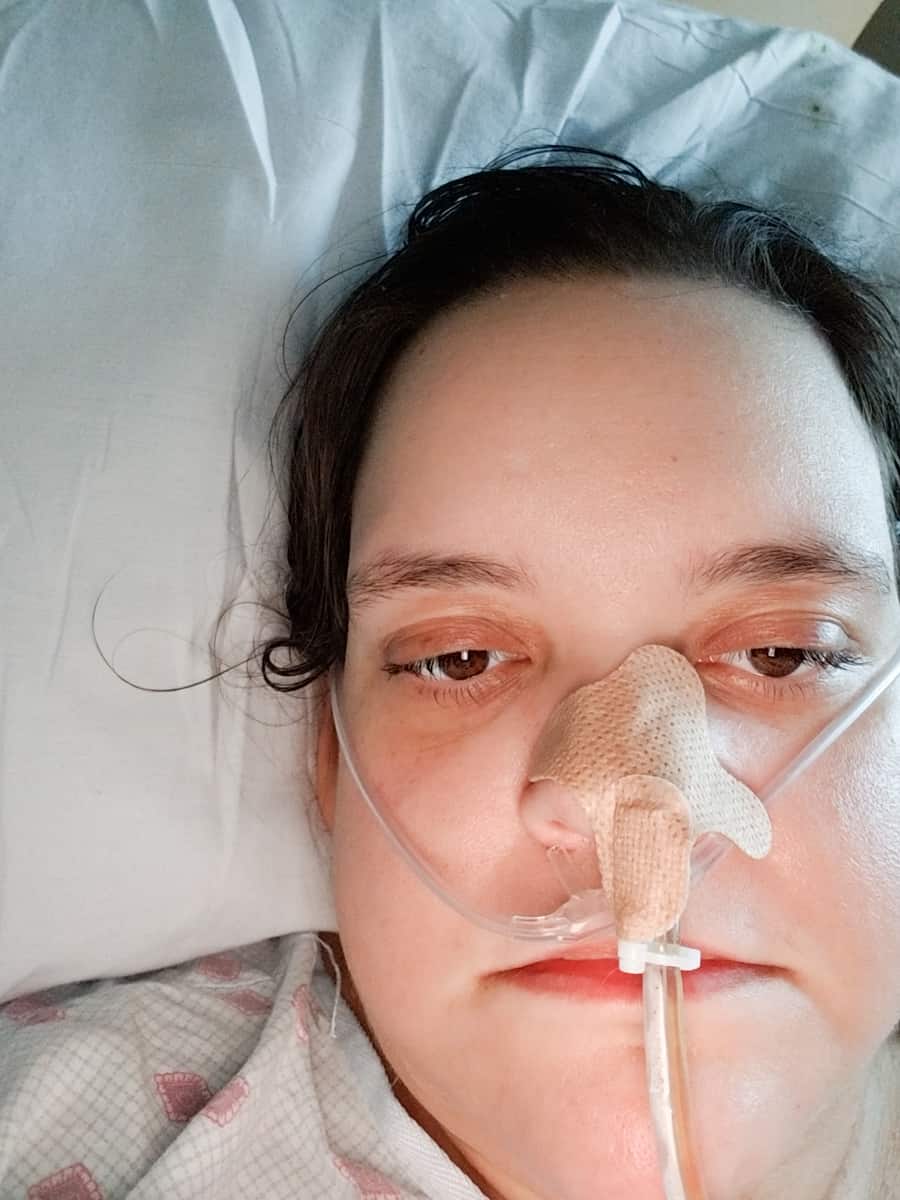 However, it wasn't all fun and games. Because the tube felt so large for me, it hurt and irritated both my nose and throat.

For whatever reason, it made it very difficult to even swallow my own saliva. It would just pool in my mouth and be sticky and even kind of itchy somehow and hard to get down.

Sometimes I just opted to spit it out instead. Yes, it was as gross and it sounded.

I also discovered that my nose apparently sweats, a lot. They had taped it on to ensure that the tube wouldn't accidentally get pulled out.

But, since I kept sweating so much the tape kept coming off. So, even more tape got added. And it would eventually fall off, too. 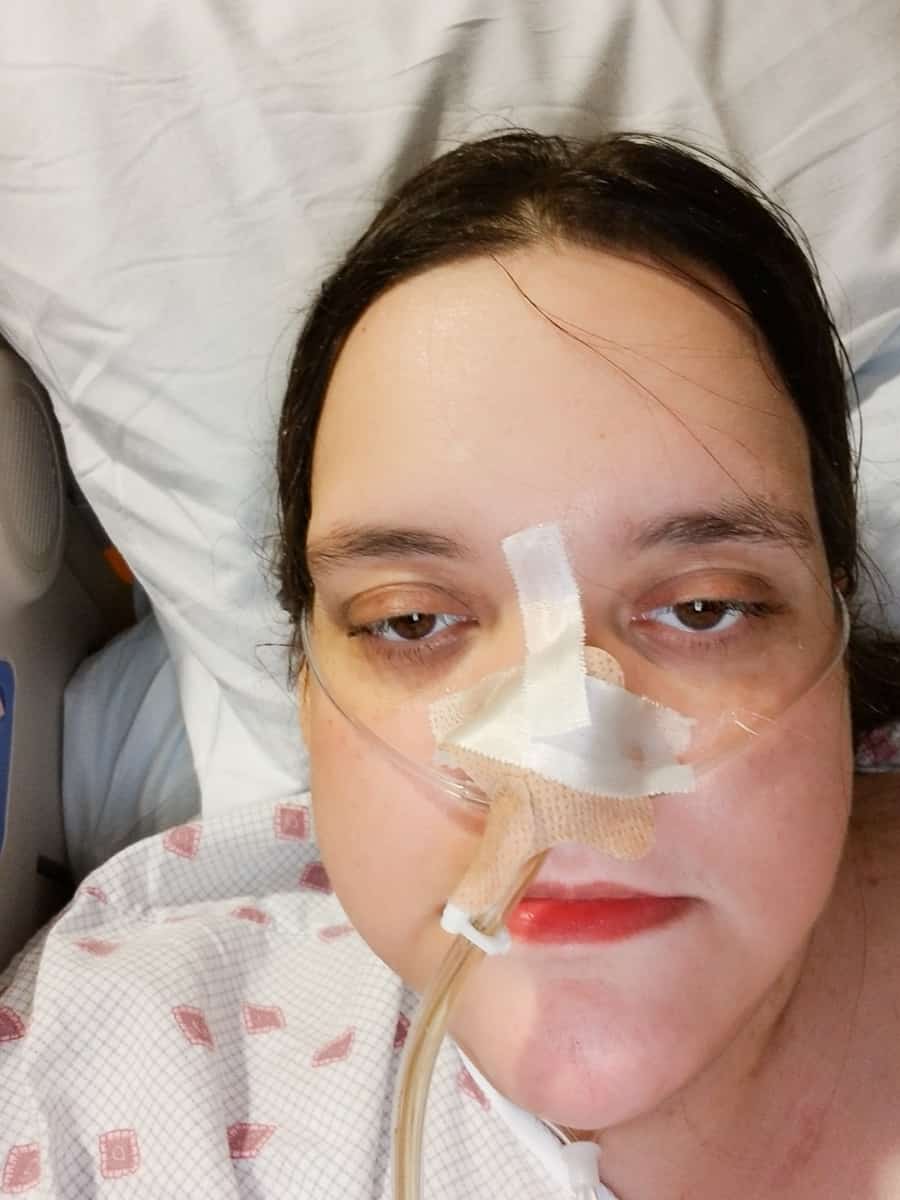 I know I had to look extra miserable too because it also made my eyes water a lot so I looked like I was crying. The nurses just kept looking at me with puppy dog eyes and Mr. Savvy even fell asleep beside me holding my hand.

I've had a chronic, multiple times a day cough for as long as I can remember. So long that I don't even really think about it anymore.

I was quickly reminded of it, however, with such a large incision and what felt like a huge tube in my throat adding to the fun. Definitely make sure to press a pillow against your incision if you need to cough with a large abdominal incision.

Moving around became even more fun too because to go to the bathroom, physical therapy walks, or for imaging, the tube had to be disconnected and a stopper put in.

I remember one night a nurse's assistant came to help me to the bathroom because I wasn't allowed to get up by myself. The main nurses were busy and she said she didn't think she was allowed to disconnect the tube so I had to use a bedside potty chair.

All of this fun went on several days. They basically needed to get my stomach empty and give it time to reset of sorts with the tube constantly on and sucking anything out.

Then I was given a day with it turned off to see if I would vomit. There was, unfortunately, some miscommunication with the nurses on the timing of things but it worked out in the end.

I did, you guess it, end up vomiting, so it had to go on a few more days. They didn't want to pull the tube out just to have to turn around and put it back in.

Which I totally understood. But it was a bit disheartening hearing one of my nurses say she thought I would have the tube in for several days. 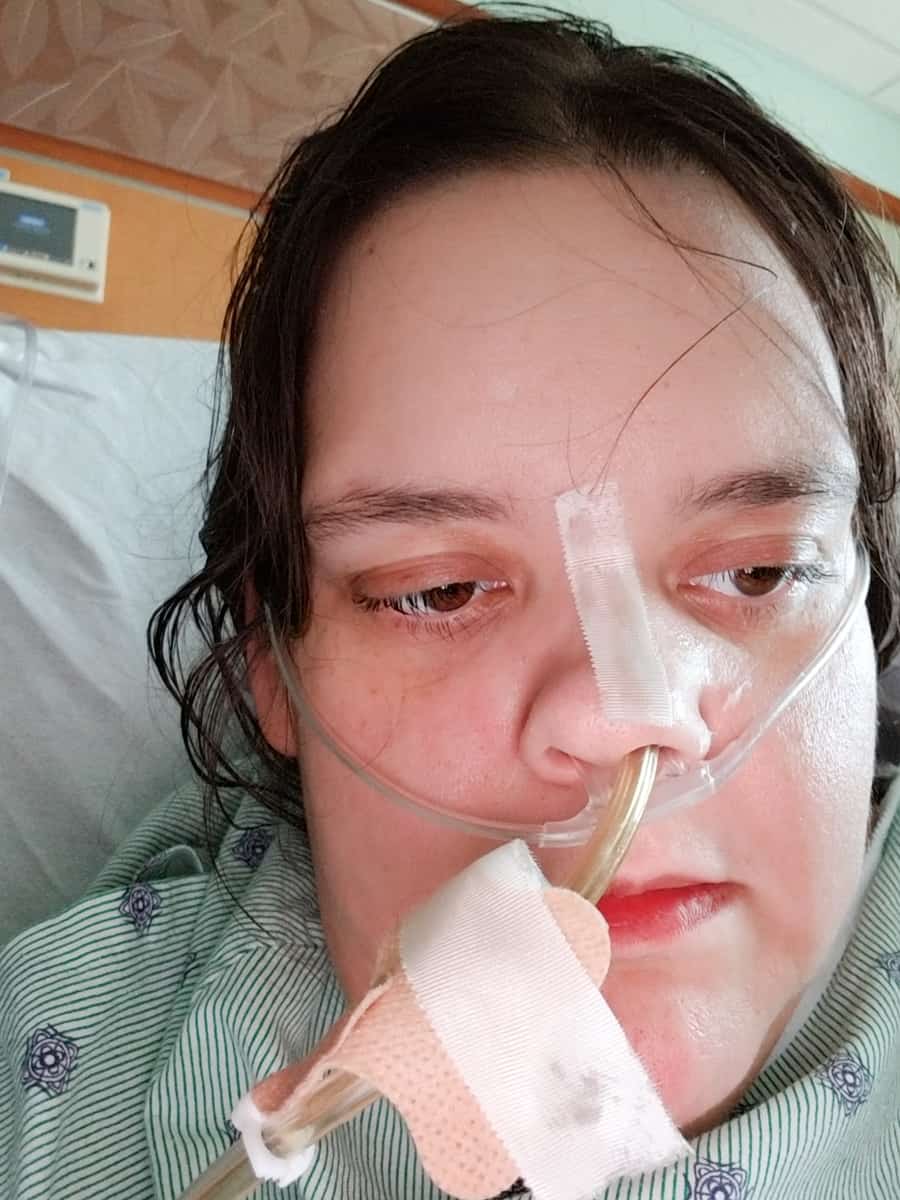 Dear God, Is This Tube Ever Coming Out?

I had originally thought (hoped) I would maybe have the tube in a couple of days. I think it ended up being more like 4 or 5.

To say I was ready to be rid of it was an understatement. I was constantly told to get up and walk around as much as possible.

However, with an oxygen tube, IV, and NG tube that was quite an adventure on top of getting very little sleep and feeling like I was constantly going to fall over because of balance issues.

I also couldn't have any sort of liquids, including water or food, the whole time it was in. Not that I felt like eating at all but I couldn't even manage to swallow any pills.

My throat hurt a lot from all the irritation. So they did let me use a numbing spray and would let me have some ice chips now and then.

I had two extra extremely awesome nurses, Christine and Kelly, during my stay and one of them helped a lot with the NG tube.

She told me that she had a lot of the same issues with the saliva and swallowing when she had her own health issue in the past that required one. It helped a lot knowing that it wasn't all in my head and that one someone else had the same experience.

I felt so silly eagerly awaiting to get this tube out and while I was thankful it helped me stop vomiting constantly, it felt like an eternity at the time.

I'll end this here and continue next time with some good news that I got while the tube was in. 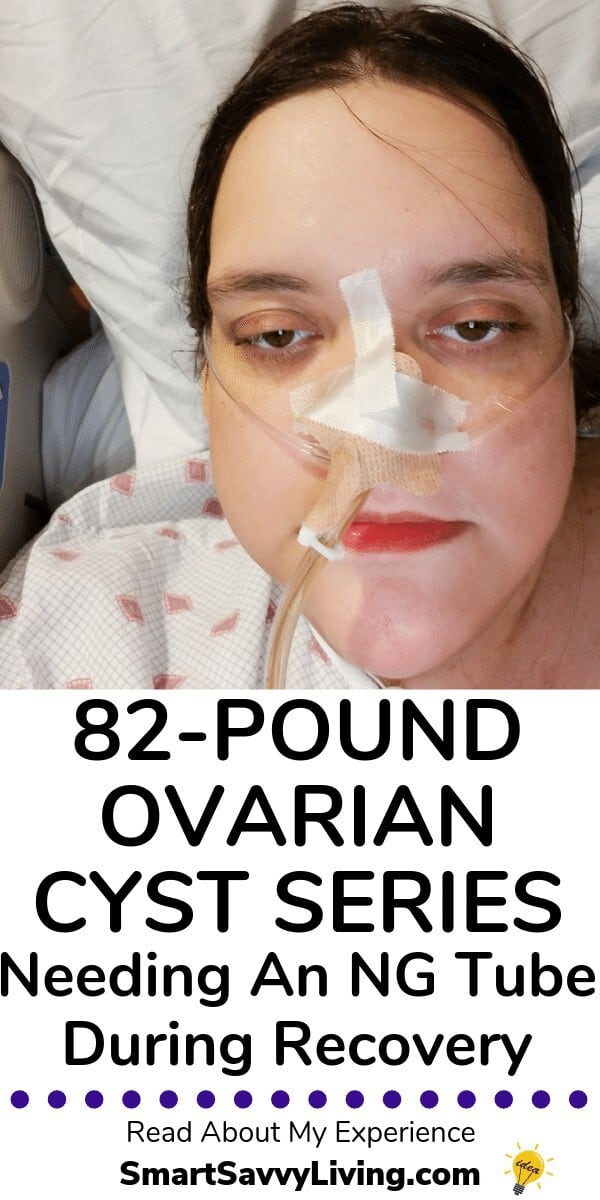 I just had a super rare tumor, gallbladder removal and Whipple surgery. My stomach didn’t reactivate after the surgery and I started puking black, partially digested blood. They did an NG tube to pump it out and that was the worst day of my life. I puked several times while they were inserting the tube, all over myself. You are spot on about the throat pain and the suction noises. I couldn’t talk at all with mine in. But watching the black stomach contents flow out was something super strange. Hope you’re healed well! I’m still on bed rest for a while longer.

So sorry you had to go through all of that, Katie, especially this time of year! I hope you're recovered soon. I'm doing well now, thank you. The NG tube experience definitely stuck with me, though. I recently had a scope through the nose to check my throat and had no idea I'd have such a stress response to how similar it was to the NG tube!