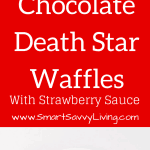 This Chocolate Death Star Waffles with Strawberry Sauce recipe is perfect to indulge with during a Star Wars marathon.

I received the Star Wars Death Star Waffle Maker at no cost to make my chocolate death star waffles with strawberry sauce recipe. I've become such a big Star Wars fan over the past several years that it amazes me that I had never seen Star Wars until I met Mr. Savvy when I was 23. It was so exciting to see The Force Awakens last year and I can't wait to see it again now that The Force Awakens was released on Blu-ray earlier this month.

The Rogue One trailer I saw recently was also pretty darn awesome and has me super excited for the movie later this year. Since we're obviously total Star Wars lovers, we, of course, love all sorts of Star Wars items and gear. We have apparel, action figures, stuffed animals, and even cook and bakeware, which are some of my favorites. I only sprayed once with some coconut oil spray and none of the waffles stuck at all. Plus, it's really easy to clean, too. I used a large cookie scoop to fill the waffle maker and it took a bit of trial and error.

Three scoops was a bit too much, which made the batter overflow and make a mess. Two scoops wasn't quite enough and didn't quite make a full waffle. So, two and a half-ish scoops was pretty perfect.

Just make sure to slightly spread out the batter with the back of the scoop before closing the waffle maker. I do also recommend having a large wood or nylon spatula turner to get the waffles out, though, because it's very important you don't scratch up the non-stick surface. I generally pull my waffles out when there's little to no steam coming out the waffle maker and the top is a bit crispy. Since the Death Star is practically synonymous with the Empire and always makes me think of Darth Vader with his black gear and red lightsaber, I decided to try out chocolate waffles with a strawberry sauce to keep up with the color theme.

I recently shared my recipe for no-cook strawberry sauce so you don't have to worry about keeping an eye on two things cooking at once. With dark cocoa powder and coffee, these chocolate waffles have a deep chocolate flavor without being too overly sweet. That means they're perfect topped with fruit and whipped cream, or even for dessert with a big ol' scoop of ice cream and chocolate or caramel sauce.

Either way, they're a great addition to your Star Wars marathon watching eats. Here's how to put them together.

Serve These Chocolate Waffles With:

This looks delicious! I love chocolate waffles, and the strawberry sauce adds a nice burst of fruity flavor.